What’s in a Name – The Issues with Formula 3?

The FIA have warned National Formula 3 championships throughout Europe that they may not be able to use the ‘F3’ name following the FIA F3 European Championship’s switch to the international governing body’s new regulations for 2014.

The European F3 Open, which began its life as the Spanish F3 championship in 2001, has already changed its name to EuroFormula Open, while the Masters of Formula 3, one of the blue ribbon events of the year, has already stated it will run cars of the older specifications from the British and German F3 championships, and will remove the F3 name from its title.

David Coulthard won the inaugural Masters of Formula 3 title in 1991, and the event has seen the likes of Lewis Hamilton, Paul di Resta, Nico Hulkenberg and Takuma Sato win the Dutch-based event.  In 2013, Swedish driver Felix Rosenqvist won for the second time in three years.

The cost of upgrading engines to 2014 specifications would have had implications on the entry levels of the European F3 Open said series the boss of promoter GT Sport, Jesus Pareja.

“To keep the F3 denomination would have entailed adopting the new FIA F3 engine rules, something that would have had severe budget implications for the teams,” said Pareja.

“We are of the view that this is not wise, especially in the current economic context. We think that offering a high-performance formula at the most reasonable cost possible is the right way forward.

“Furthermore, with the 2014 engine upgrade, the Euroformula Open cars will have a performance level similar to any other series using F3 chassis.

“For us to retain the freedom to further improve the performance package and the cost-effectiveness in the future is a crucial point.

“The name change also avoids confusion with the European F3 Championship recently reinstated by the FIA. We definitely think that preserving the essence of our series is more important than what it is called.”

Frits van Amersfoort, a team owner who runs cars in both the European and German F3 series, admits that the FIA trying to get all F3 championships to follow one set of rules is important, but does not believe older specification cars should miss out on being called F3 cars.

“They are trying to get everything under one umbrella and I think that’s important,” said van Amersfoort, “but I can’t understand why people with older cars and engines can’t call themselves F3.

“The FIA must understand that it takes time to adapt to new regulations. You can’t change the world in one winter.

“It is vital that the British and the German series (pictured) can keep the name ‘F3’ – it’s the most important thing the series have.” 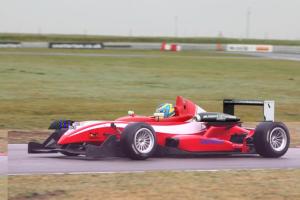 Peter Briggs, who runs British Formula 3 teams group FOTA, believes it is sad that cars built for F3 may not be able to use the F3 name.

“FOTA and SRO [the British F3 promoter] have never been asked not to use the F3 title,” he said.

“I don’t think it will make any difference to race entries. It’s just sad for historical purposes that a car built as an F3 car couldn’t be called F3.”

So why have the FIA clamped down so much on the use of the F3 name?  In the long run it seems like a good idea to have one set of rules covering all the series’, but to try and enforce it over one winter is boarding on stupid.

The British and German F3 championships are two of the most important championships in the world of motorsport; 18 of the 22 drivers in Formula 1 raced in British F3 at some point.  To even think about removing the F3 name from such a historic series as British F3 is saddening.

“I just hope that common sense will win and that there will be national series for F3 in Britain and Germany, because these are needed as feeder series for European F3,” said van Amersfoort.

And I concur.  The FIA need to relax and allow the F3 name to continue to be used by the British and German F3 events.  The F3 name has already been lost from the Zandvoort Masters, we cannot have it disappearing from anything else.